← Not Lost in Translation, After All.

Posted by A Patented Life

This Monsanto-free project has led the creators of A Patented Life down some unexpected paths for sure, not the least of which has entailed serious expansion of our vocabulary.  Bear with me as I try to take you along one somewhat mucky trail that starts with dead honeybees…

Because of this project our daily lexicon now contains terminology like bacillus thuringiensis or Bt – that’s the naturally-occurring insecticide that has been genetically inserted into seeds, making Bt plants, like cotton for instance, toxic to insects.  Or monoculture, the model of industrial agriculture promoted by Monsanto, et al. as part of the GMO regime.

Now, we’re adding another term to our increasingly esoteric vocabulary:  neonicotinoids, somewhat sexily known as neonics. While the genetically modified Bt crops themselves are classified as insecticides and are indiscriminately toxic to friend and foe alike, neonics are a class of topical pesticide used in farms and homes which coats seeds or plants, contaminates flowers and pollen, and kills the bees whose job it is to pollinate. 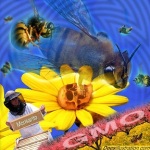 Turns out, neonics are directly connected to another term – Colony Collapse Disorder – a global epidemic.  A recent Huffington Post article on Monsanto’s acquisition of a bee research company nicely outlines the confluence of issues conspiring to decimate the honeybee population and after reading it I genuinely take issue with the name Colony Collapse Disorder.  The term seems to suggest the bees themselves have some sort of collective pathology that is causing their own demise.  As though it’s the bees’ fault, not the monoculture, industrial agriculture system that dramatically narrows their once diverse diets, that poisons what limited options are available to them, that crowds them into commercial hives which Rick Rigutto from Weaver’s Way aptly compares to cattle feed lots, and that corrupts the gene pool through artificial insemination of the queens.

Regardless of what you call it, though, what experts all seem to agree on is a declining bee population has serious implications for our food supply.  Which leads me to one last vocabulary word:  famine. But don’t worry, because with Monsanto now entering into the bee research field we can be assured they’ll come up with solutions to the bee epidemic that will benefit all of humanity – or at least those who are Monsanto shareholders.

About A Patented Life

Documentary-Style Social Work Project December 15, 2011 – April 1, 2012 Our Mission This is about seeds. A Patented Life is a project documenting our 6 week personal rejection of the genetically modified seeds that compromise the food on our tables, small farms around the world, and our relationship to the land. Through genetic engineering and US patent law, Monsanto Inc., the company which brought us Agent Orange, leads the way in dominating our world’s seed supply. The purpose of this project is to activate the public to stop Monsanto’s genetic experiment on our food and livelihoods in its tracks. We are returning to real foods and inviting eaters of the world to do the same. Goals *To get people to stop consuming GMO products by sowing seeds of doubt around the safety and ethics of genetic engineering(GE) *Contribute to the work of existing community movements about this human rights issue Come Join Us!! Here are a few ways to get involved: *Subscribe and Contribute photographs, articles, thoughts, experiences, and questions to: A Patented Life on Facebook (Community page) apatentedlife.wordpress.com Ready to go GMO free? Join us anytime from January 15th- February 26th, 2012. We are going for 6 weeks- Join us for a day, a week, or even multiple weeks and keep us posted on the experience! Or just follow our journey, join in the discussion, and check out our Task of the Week on our facebook page. Looking forward to the organic adventure with everyone!! Together, we are stronger! Ready to be filmed? Contact us for an interview! Email: apatentedlifejm@gmail.com
View all posts by A Patented Life »

Posted on May 9, 2012, in Farming, Genetic Engineering, Mary, Monsanto. Bookmark the permalink. Leave a comment.

← Not Lost in Translation, After All.