← Excuse Me, Monsanto
A Last Supper →

Posted by A Patented Life

Over the past 7 weeks I’ve taken every opportunity to talk with dozens of small farmers in Bangladesh. They tell me about their lives, their crops, their struggles with changes in weather patterns, and the market. As I listen, their thirst for knowledge and training is evident. They want to stay on their land. They want to have sustainable and profitable farming practices. They want to be self-sufficient and respected.

In the Boira union of the Mymensingh District, farmers explicitly stated they sought organic agriculture as a buffer against dependency on multinational corporations and the costly input-intensive regime linked with industrial agriculture. Development Wheel, the Bangladesh-based NGO I’m interning with, has spearheaded a program which incorporates training on organic pesticide control and composting methods, many of which the farmers of Boira have adopted. Composting particularly has opened up opportunities not only for reducing expenses but also for income generation. In Bangladesh, chemical fertilizer is frequently contaminated by unscrupulous retailers who mix it with cement or other substances in order to maximize profit. By composting, farmers are able to eliminate this threat to their crops altogether. 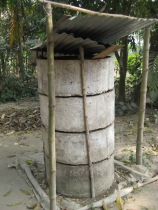 The composting method they’ve begun to practice uses trichoderma, a fungus that naturally occurs in soil which has all kinds of benefits for soil enrichment and protection. Trichoderma accelerates the composting cycle so that volume can be increased. The composting process also generates drainage enriched with trichoderma which can be collected and reused, with any surplus exchanged between farmers or sold at the market. It’s a beautifully simple system.

Of course I talked with Boira farmers about saving their seeds and I learned that composting is directly linked with seed saving. They showed me their method using terracotta pots sealed with mud, explaining they saved mostly local rice and jute seeds. Vegetable seeds are more difficult to save, they explained, so they tended to purchase hybrid seeds. When asked how they could save more seeds the resounding answer was increasing the volume of organic fertilizer with more composters so the healthier soil could support stronger local seeds. Boira farmers said if every household had a composter they could be organic, save seeds, and be self-sufficient.

Right now, with DEW, I’m looking at ways to make this goal a reality and sincerely hope we could at least work with every other or every third household to install the composter and train the technique. It’s exciting! As I write this I am struck by the similar struggles of small farmers – and similar aspirations. In many people’s movements for social change, the mantra is “Justice, not charity.” These farmers are asking for help in creating systemic justice so that they need not rely on charity, but rather can have the dignity of meaningful work, feeding their families, their communities, their country. I’ve said this before, but I feel so incredibly honored and blessed to be a part of this work.

About A Patented Life

Documentary-Style Social Work Project December 15, 2011 – April 1, 2012 Our Mission This is about seeds. A Patented Life is a project documenting our 6 week personal rejection of the genetically modified seeds that compromise the food on our tables, small farms around the world, and our relationship to the land. Through genetic engineering and US patent law, Monsanto Inc., the company which brought us Agent Orange, leads the way in dominating our world’s seed supply. The purpose of this project is to activate the public to stop Monsanto’s genetic experiment on our food and livelihoods in its tracks. We are returning to real foods and inviting eaters of the world to do the same. Goals *To get people to stop consuming GMO products by sowing seeds of doubt around the safety and ethics of genetic engineering(GE) *Contribute to the work of existing community movements about this human rights issue Come Join Us!! Here are a few ways to get involved: *Subscribe and Contribute photographs, articles, thoughts, experiences, and questions to: A Patented Life on Facebook (Community page) apatentedlife.wordpress.com Ready to go GMO free? Join us anytime from January 15th- February 26th, 2012. We are going for 6 weeks- Join us for a day, a week, or even multiple weeks and keep us posted on the experience! Or just follow our journey, join in the discussion, and check out our Task of the Week on our facebook page. Looking forward to the organic adventure with everyone!! Together, we are stronger! Ready to be filmed? Contact us for an interview! Email: apatentedlifejm@gmail.com
View all posts by A Patented Life »

Posted on March 23, 2012, in Farming, Mary. Bookmark the permalink. Leave a comment.

← Excuse Me, Monsanto
A Last Supper →